An analysis of how compensation and working preferences vary widely depending on location, gender, age, and parental status

At Hired, our mission is to match tech professionals with a job they love, and we know that varies depending on each person’s unique preferences — especially when it comes to compensation. We also know that the current pandemic has completely changed the way we work, what we want from a job, and how we want to work long-term, and it’s valuable for companies to understand how sentiment and preference vary among a diverse workforce.

This report, a deeper dive into the insights from our State of Salaries Report, is designed to give employers a clear look at how things like salary expectations, perception of job security, and relocation plans differ based on a candidate’s current location, age, gender, and parental status.

Understanding the nuances of different populations of people not only helps innovative companies recruit top tech talent, but also foster a working environment that is equitable and inclusive, enabling candidates from all backgrounds to succeed.

Part 1
By Market: The SF Bay Area, New York and the UK
Remote work may be global, but talent still thinks like a local

JOB SECURITY
Show me the money: Financial security during COVID

With COVID-19 wreaking havoc on the global economy, we wanted to explore whether that’s impacted how tech professionals expect their salaries to change over the next 6 months, and whether those expectations vary by market, specifically in large tech hubs such as the SF Bay Area, New York, and London in the UK.

Flat Salary Expectations: In each market, we found some consistency, with about 45% of tech talent in the SF Bay Area, New York, and the UK expecting their salary to stay the same during the next 6 months.
However, tech professionals in the SF BayArea and the UK are slightly more likely to expect a dip in their salary, with 7% in each market reporting that they expect a decrease of up to 20%, compared to 4% of New Yorkers who said the same. 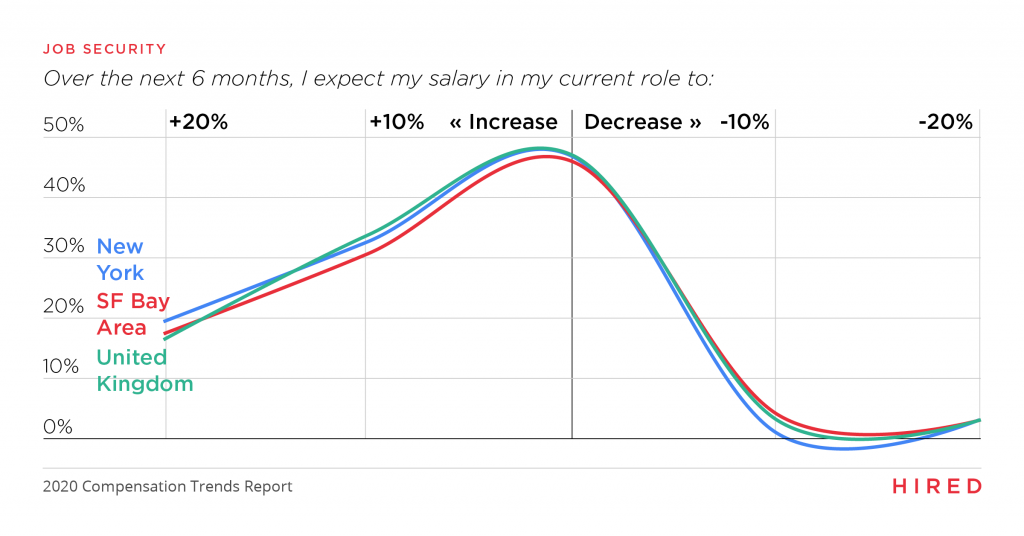 SF Bay Area is Shaky: Interestingly, we found that tech talent in the SF Bay Area are substantially more worried about job security, with 53% saying they are either concerned or very concerned about being laid off or furloughed in the next 6 months compared to 42% of New York respondents and 36% of UK respondents. The uncertainty among tech talent in the SF Bay Area could be due to the prevalence of venture-backed companies in that region compared to other tech hubs. It was reported that in 2019 the SF Bay Area retained its venture funded dominance, bringing in three times more dollars than New York, and these venture-backed companies are often startups. While startups offer exciting opportunities to join a company in its early stages, they also fail far more often than fully-established companies. When you combine that failure rate with a global pandemic, it’s easy to see why tech talent in the SF Bay Area are more concerned about job security than those in markets with fewer VC-backed startups and a broader range of businesses, such as New York and the UK. 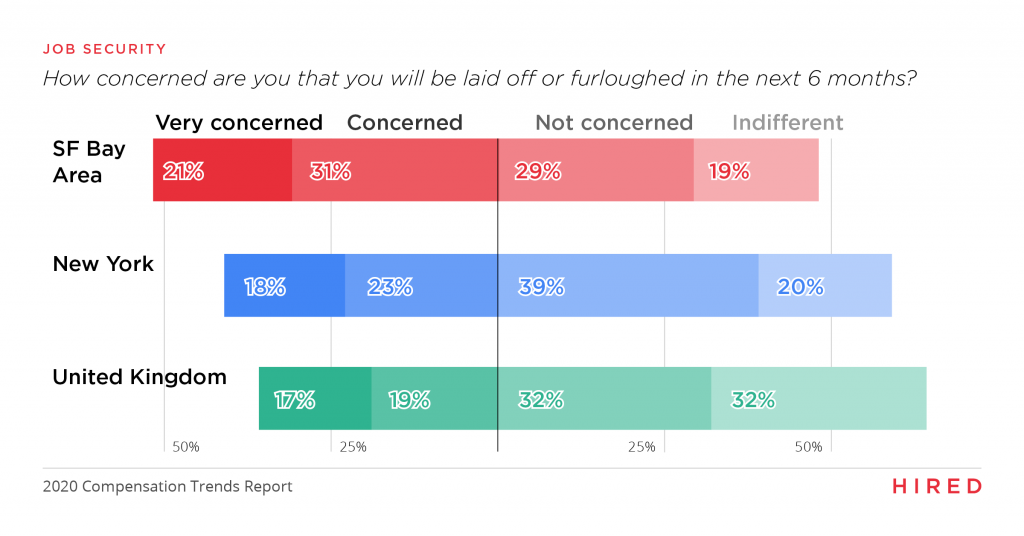 When we asked tech talent in the SF Bay Area, New York and the UK how long they intend to stay in their current city, we saw remarkably little variation between the groups. However, when we asked what their motivating factor would be for relocating, we saw some noteworthy differences. 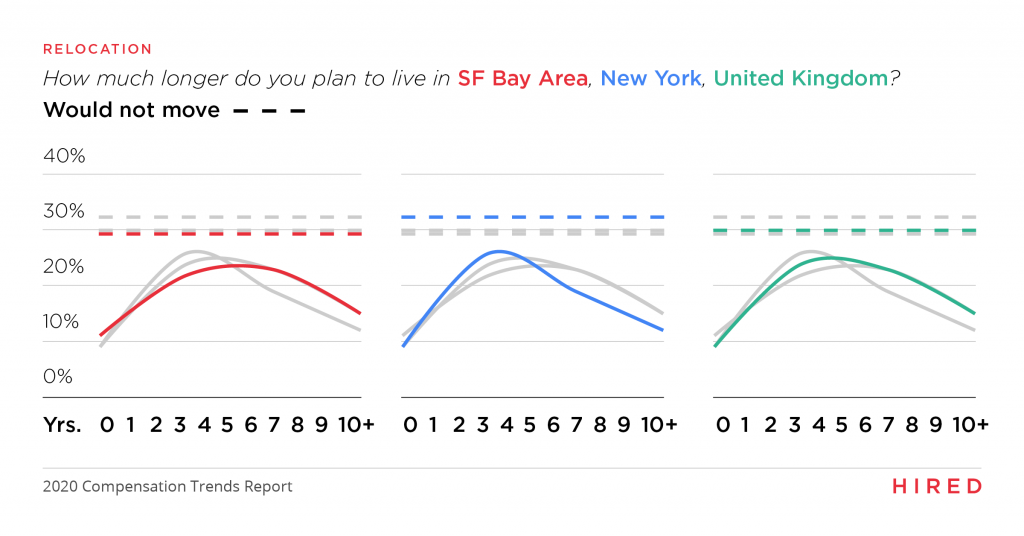 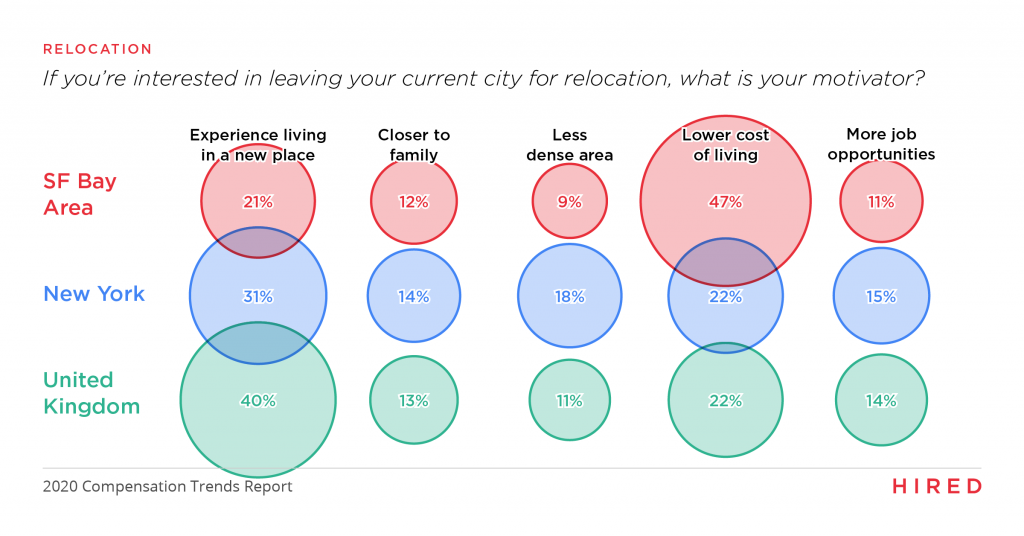 Remote Work Changes the Math: When we explicitly asked what they’d do if their employer asked them to work from home full-time, we found that 42% of tech talent in the SF Bay Area and 40% of NY tech talent would move to a less expensive city compared to only 33% of their UK counterparts. 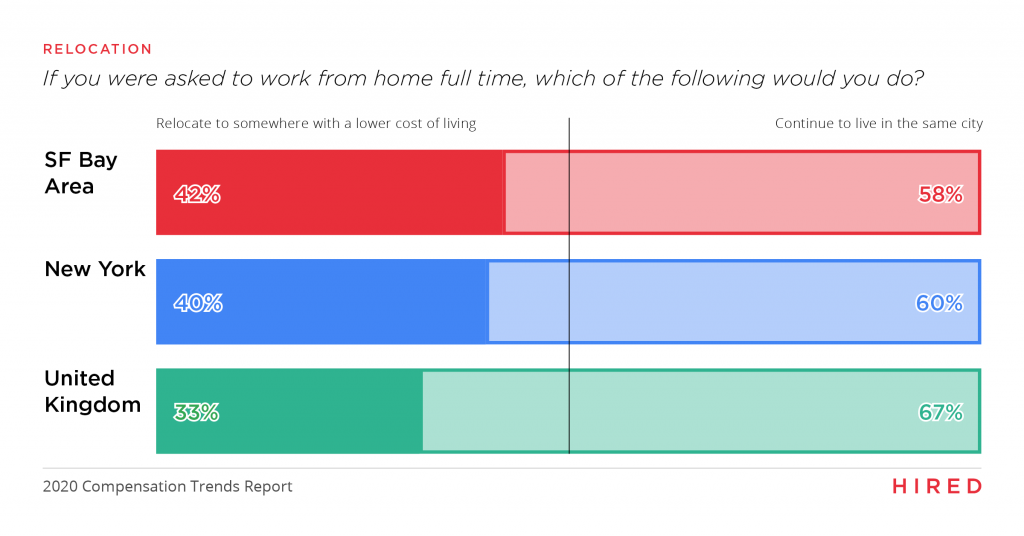 For professionals based in prominent tech hubs such as the SF Bay Area and New York, their preferred cities for relocation —
unsurprisingly — are Seattle, Los Angeles, Austin, and San Diego. And despite their reported desire to live in a less expensive place, tech talent in SF Bay Area ranked New York City as their third most desirable city for relocating, while New Yorkers ranked San Francisco as their second most desirable city. All of this suggests that while new tech hubs are emerging, tech talent remain very interested in the coastal cities that have fueled tech innovation for years. Where tech talent in each major tech hub is most interested in moving to: 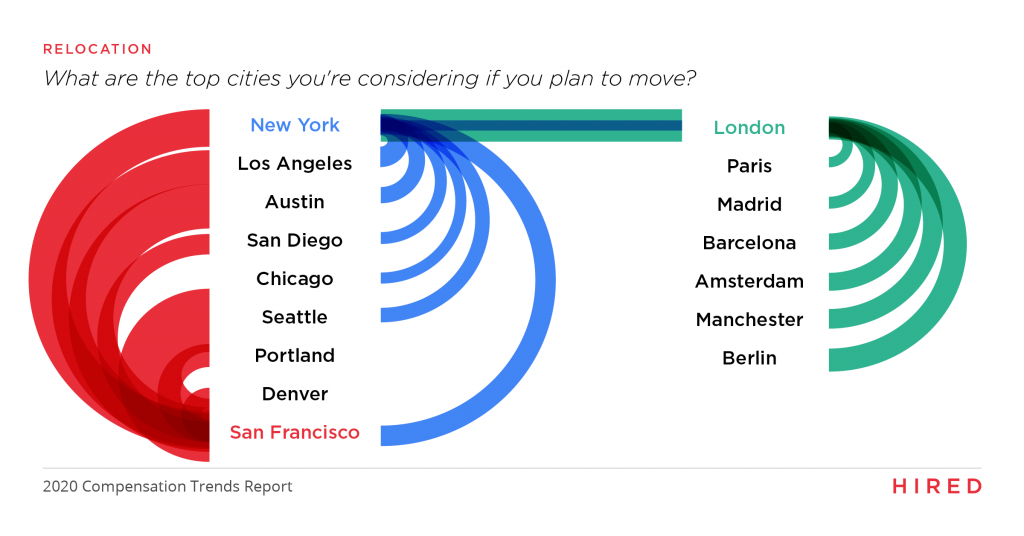 REMOTE SALARY PREFERENCES
Across markets, tech talent will not take a paycut

When we asked if their salary expectations would change if they were applying for a new job that was fully remote, we found that UK and SF Bay Area tech talent are slightly more likely to change their expectations, with 35% and 34% respectively saying they would, while only 29% of New York tech talent said the same. 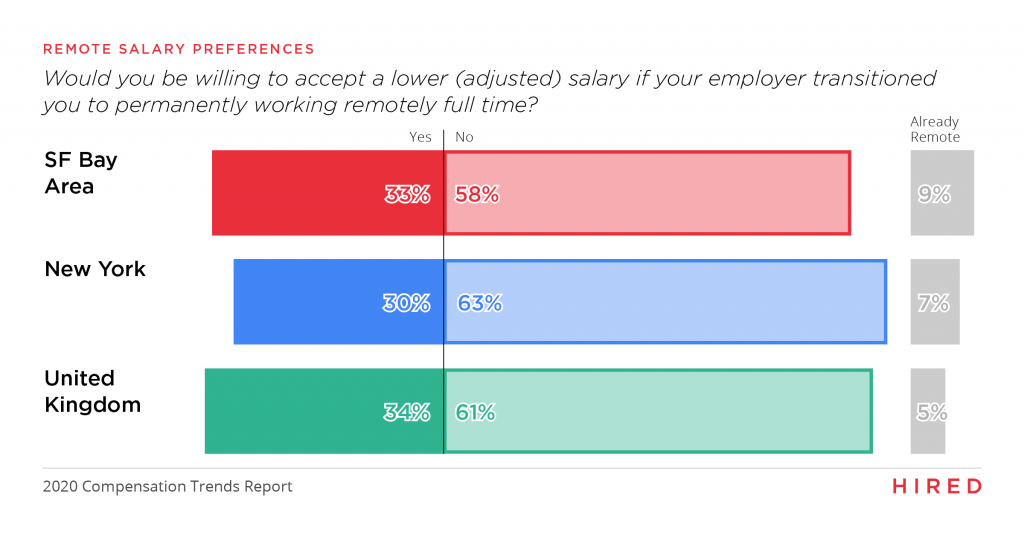 As far as how tech professionals want to work post-COVID, the majority of survey respondents in all three markets (57% in New York, 66% in SF Bay Area, and 61% in the UK) said they’d like to return to the office 2-3 times a week. On the flip side, 32% of New Yorkers want to be fully remote, compared to 30% of UK-based tech talent and 25% of those based in the SF Bay Area. 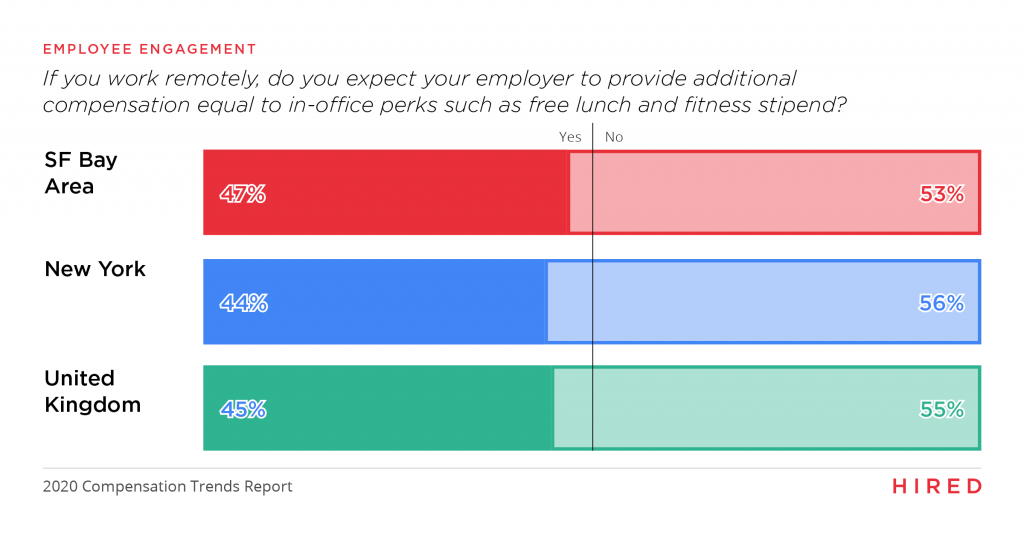 Interestingly, tech talent across these three major tech hubs are split down the middle on whether the office perks they may have been used to should translate to a remote work setting. And while the jury is out on the true value of providing your workforce with free lunches and fitness reimbursements, it seems as though tech talent recognize the unique benefits that remote work provides, including increased productivity, and flexible work schedules that don’t require a commute.

Part 2
Diverse Groups: Gender, Age & Parental Status
Who you are matters more than Where you are

In addition to exploring the differences in compensation preferences, perceived job security, relocation plans, and post-COVID
workstyle between tech professionals in different markets, we also wanted to recognize the variation that may exist among tech talent based on their gender identity, parental status, and age group.

Since compensation is multifaceted across different organizations, it’s vital for employers to not only be aware of the differences that exist among varying groups, but understand how that may ultimately impact their ability to attract, retain and foster a diverse and equitable workforce.

When exploring how COVID-19 has impacted salary expectations for the next 6 months, we found some very interesting differences — especially between age groups. 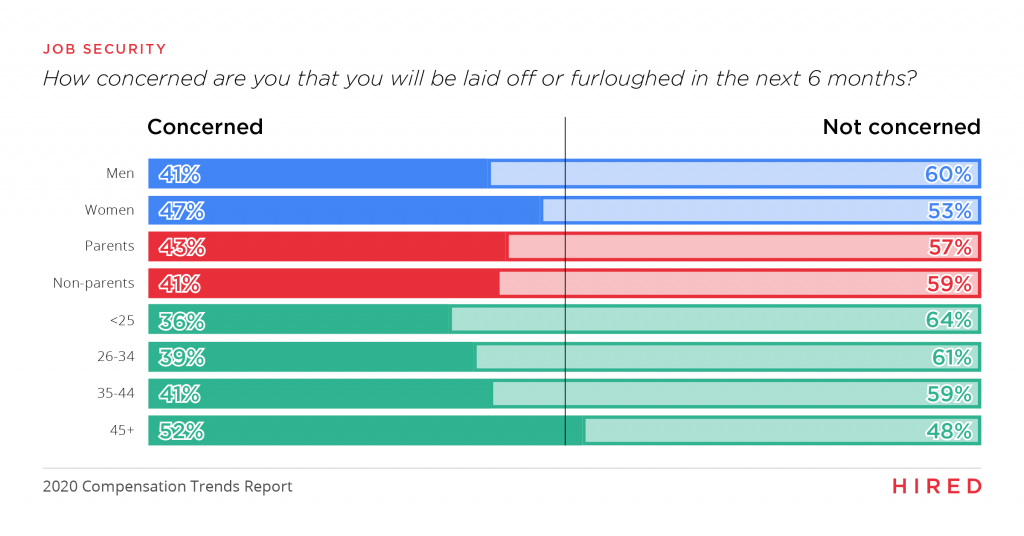 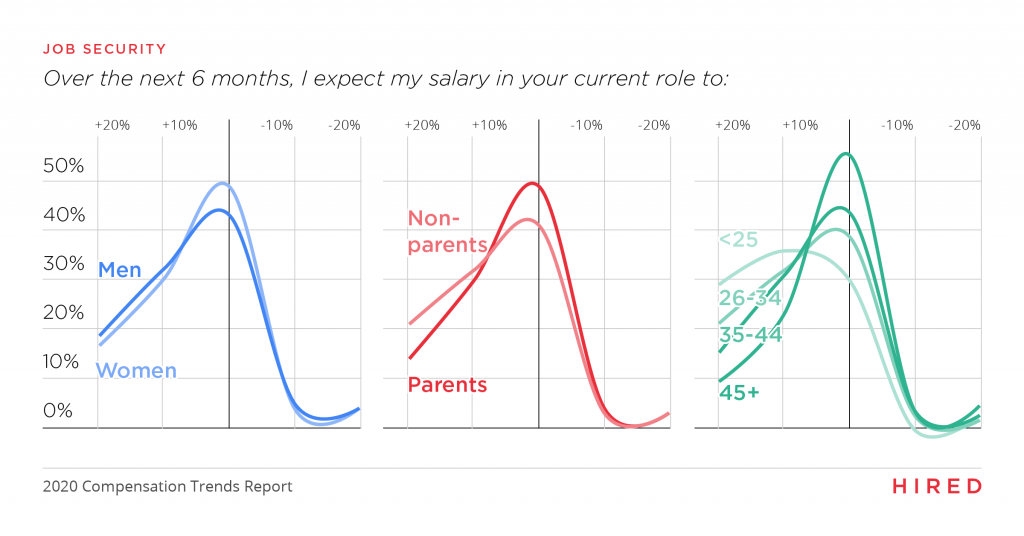 When it comes to relocation plans, we noticed some substantial differences based on age and parental status. Understandably, there is no one size fits all framework for how people make decisions, rather everyone prioritizes different things based on their unique circumstances. 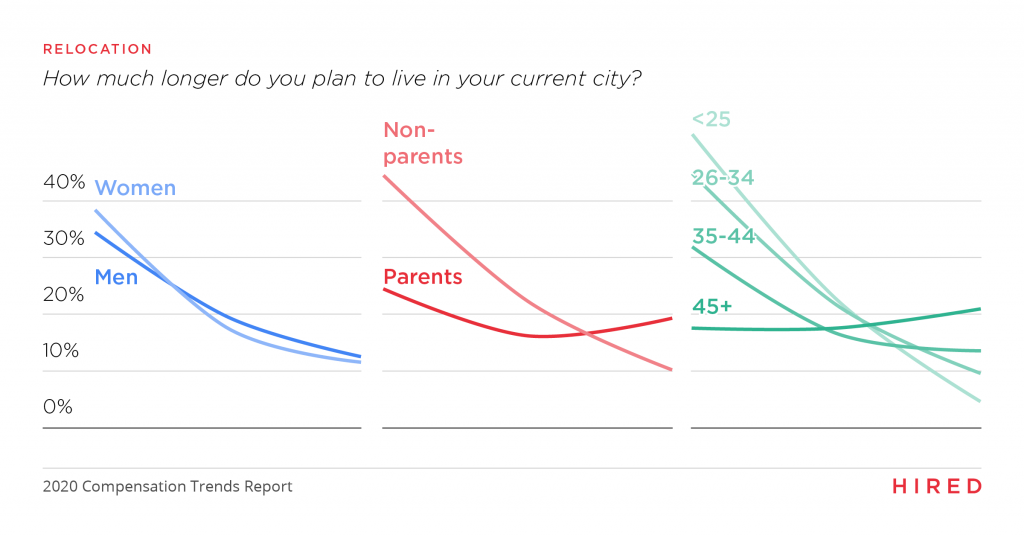 When it comes to taking a paycut to work remotely, we found a clear pattern suggesting that the older a person is, the more likely they are to accept a lower adjusted salary to work remotely forever. Specifically, 37% of tech talent aged 45 and older said they’d be willing to take the lower salary, which was the highest of any demographic group we looked at. By comparison, only 28% of tech professionals under age 25 said the same, and that number increases steadily with age. Similarly, 36% of respondents aged 45 and older and 34% of those aged 35-44 said their salary expectations would change for a fully remote position, compared to 31% of respondents aged 26-34, and just 27% of those under 25.
Women Don’t Discount Remote Work: Additionally, 29% of the women in tech we spoke with said they’d accept a lower adjusted salary to work remotely, compared to 34% of male respondents. Women are also less likely to adjust their salary expectations for a fully remote position, with 28% saying their expectations would change compared to 34% of men.

Trading Salary for Family Time: Non-parents are also less inclined to take a paycut to work remotely, with 30% saying they would compared to 34% of parents. 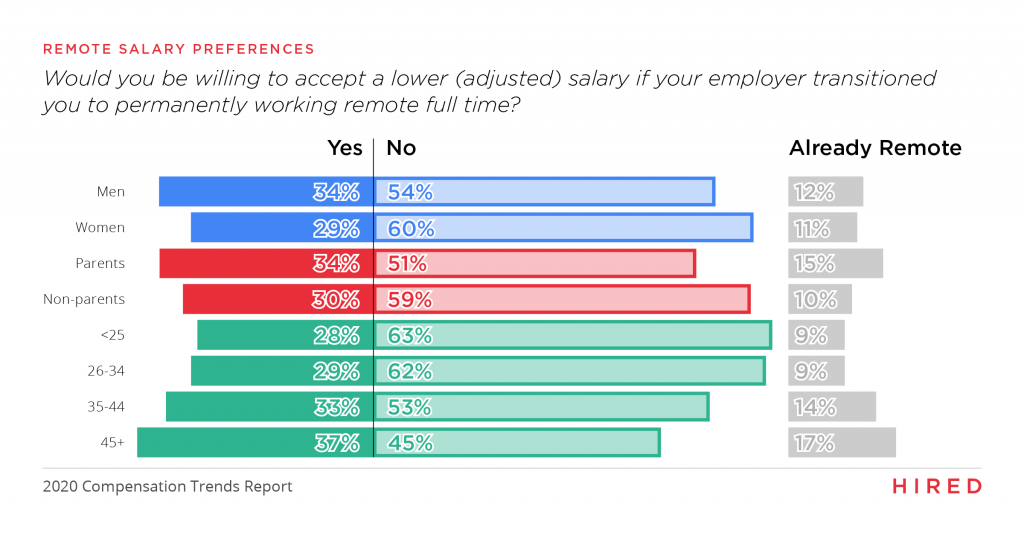 As far as how post-COVID work preferences vary, we found limited variation by gender, but we did observe some notable differences based on age and parental status. Older tech talent are less inclined to get back to the office, with 41% of respondents aged 45 and older and 38% of those aged 36-44 saying they do not want to return to the office at all post-COVID, compared to 32% of respondents aged 26-35 and 27% of those under 25. Parents are also less eager to get back, with 39% saying they have no desire to return to the office post-COVID compared to 33% of non- parents.

Interestingly, 50-60% of respondents across every demographic group reported a desire to work from the office 2-3 times per week post- COVID, suggesting that tech talent from all walks of life want the option of going back to the office on their own terms and retaining the flexibility they’ve recently become accustomed to. 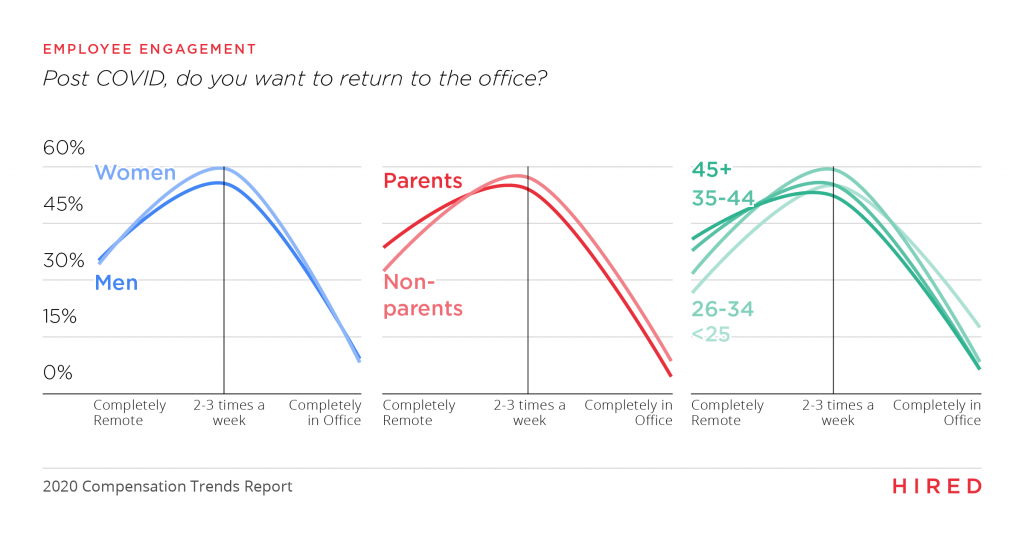 Recognizing the fact that there’s no one-size- fits-all approach to compensation and working styles is critical for companies to successfully attract and retain top tech talent. We hope the data and trends outlined in this report will help employers fine tune their hiring practices by zeroing in on what matters most to each candidate. Whether that’s telling a parent that they can work from home full time, or assuring a recent college grad that they’ll have the option to come into a physical office, it’s all about understanding what that candidate wants and delivering on the promise to provide it.

At the heart of Hired’s marketplace is our mission to get everyone a job they love. Diversity, Equity and…

Almost two years ago, we started Hired to help the most innovative companies find the best technical talent so…

Hired is a marketplace that matches tech talent with the world’s most innovative companies. Hired combines intelligent job matching with unbiased career counseling to help people find a job they love. Through Hired, job candidates and companies have transparency into salary offers, competing opportunities and job details. This level of insight is unmatched, making the recruiting process quicker and more efficient than ever before. Hired was founded in 2012 and is headquartered in San Francisco, with offices in the United States, Canada, France, and the UK.