Hired Launches in Chicago with over 5000 Applicants and 125 Companies

Hired Launches in Chicago with over 5000 Applicants and 125 Companies 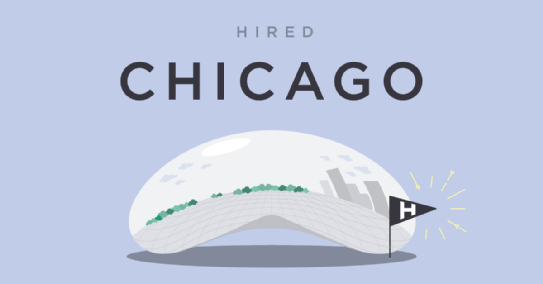 Chicago, a city known for its diversity of industry is now a hotbed for booming tech. While the Windy City has always been well known as a major world financial center, a hub for manufacturing, and home to three huge Dow 30 companies (Boeing, Kraft Foods, and McDonalds), it has recently made its mark in tech, raising $1.6+ billion in capital in 2014 alone.  The rising number of entrepreneurs from major universities combined with VC funding and a plethora of incubators make Chicago a haven for a growing tech community.

During our 5 month beta period, we saw over 5000 engineers and over 125 companies sign up for the platform. We facilitated introductions between hundreds of engineers and growing companies in Chicago, including Braintree, Grubhub, Trunk Club, and WyzAnt.

If you’re a growing company in Chicago looking for talented developers, product managers, data scientists and designers — sign up here.

Know someone who would be a great fit for Hired? You can invite them to sign up here and we’ll send you $5,000 if they accept a job through our Chicago marketplace.

A year ago we launched Developer Auction out of our own frustration with hiring great engineering talent. [caption id="attachment_136"…

One of the most important parts of our mission at Hired is adding transparency to the job search, especially…