Sometimes, you know how you want to do things, but not what you would do. Gilad Golan and Emmanuel Marot wanted to create a startup together, but weren't sure about what it would be.

Eventually, they settled for the worst possible business, crowded and notoriously unprofitable: an iPhone photo-sharing application. It went better than expected.

Yet, busy with this application, one day they decided to create a simple script to automate their personal investments in Lending Club, a promising but time-consuming new kind of asset. Immediately, they realized most of the opportunities where snatched up by professionals and that retail investors like them could only access leftovers. The asset class was called 'peer lending', but Wall Street had already stepped in.

They invited other individuals to use their script. The feedback was overwhelming. A few months later, Gilad and Emmanuel raised money, registered as an Investment Adviser with the SEC and opened their service. Today LendingRobot has thousands of clients and manages tens of millions of dollars for them. Tomorrow it will launch a service that will dramatically change peer lending, and put any individual on equal footing with hedge funds.

We have a great team, and we like to hire great people.
Our hiring process starts with a 30-60 minute informal chat during which we'll learn to know each other a bit.
If we both want to move forward, the next step would be an interview loop with 3 to 4 technical interviews, 1 hour each.

We offer competitive pay and benefits, and a chance to help bring financial services to the 21st century. 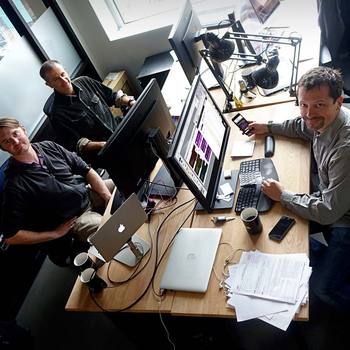