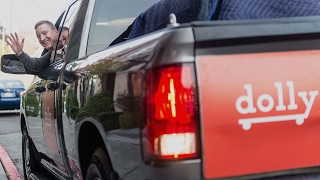 Flying down a Chicagoland highway with a mattress bouncing on the roof of a four door sedan, Chad realized there must be a better way to move something as simple as a mattress. A few days earlier, he had reached out to a few local moving companies to get some help moving a few big things from his studio apartment: a desk, mattress, and dresser. $1000, $900, $1500 — the quotes were insane. Having long ago swore off U-Haul, Chad decided to move the stuff on his own. There must be a better way...

Dolly was born from this struggle that most of us have had at one time or another. Either pay an arm and a leg for a moving company, or prepare the Icy Hot for your muscles and cancel your plans for the entire weekend to do this yourself. Dolly is the perfect solution in-between.

The co-founders set off to build an app that connected local pickup truck owners with people in need of help. Dolly was solving a problem that many people had experienced and using the collaborative marketplace to transform pricing and accountability. Investors took notice and Dolly landed a $1.7m Seed Round to bring Dolly to more people.

In October 2015, Dolly announced a $8m Series A investment lead by Maveron.