Today at Hired, we’re very excited to announce the launch of The UK Tech Workplace Equality Report, our first ever report focusing solely on equality in the UK tech workplace. We know people are the foundation of every great business and Hired believes that transparency, around many things including diversity, is critical to making hiring both equitable and efficient. That’s why we’re committed to sharing data that arms our candidates and clients with the right information and empowers companies to build strong, equitable, and diverse teams.

In this report, we’ve done a deep-dive into the experiences of real people working in UK tech to understand the current state of the nation, leveraging data from more than 30,000 interview requests and job offers to over 5,000 candidates in the UK facilitated through Hired’s global marketplace of 10,000 companies and more than 98,000 job seekers. In addition to the proprietary data, we conducted a survey of more than 1,300 UK tech workers to understand more about their personal experiences.

The data provides unique insight into equality across different job roles in UK Tech and we examine the gender pay gap, one piece of the equality puzzle, as well as many other kinds of discrimation experienced by marginalised groups including different ethnicities, different ages, the LGBTQI+ community and, for the first time in a Hired report, people who are neurodiverse.

The aim of this study is twofold. We want to arm tech talent of all backgrounds with the knowledge they need to negotiate fair pay and stand up to discrimination. We also want to help companies understand their role in reaching pay equality and empower them to create a welcoming workplace for all.

This is what we uncovered:

Women in technology in the UK are offered 4% less salary on average than men. This is a slight improvement from 2017 when the wage gap was 5% and is much better than the UK median pay gap which is 11.9% across all industries and roles. But, the UK is still lagging behind the US wage gap in tech, which is now 3%.

This shows that the industry needs to dedicate itself both to paying women equally and empowering women to understand and ask for their true worth. 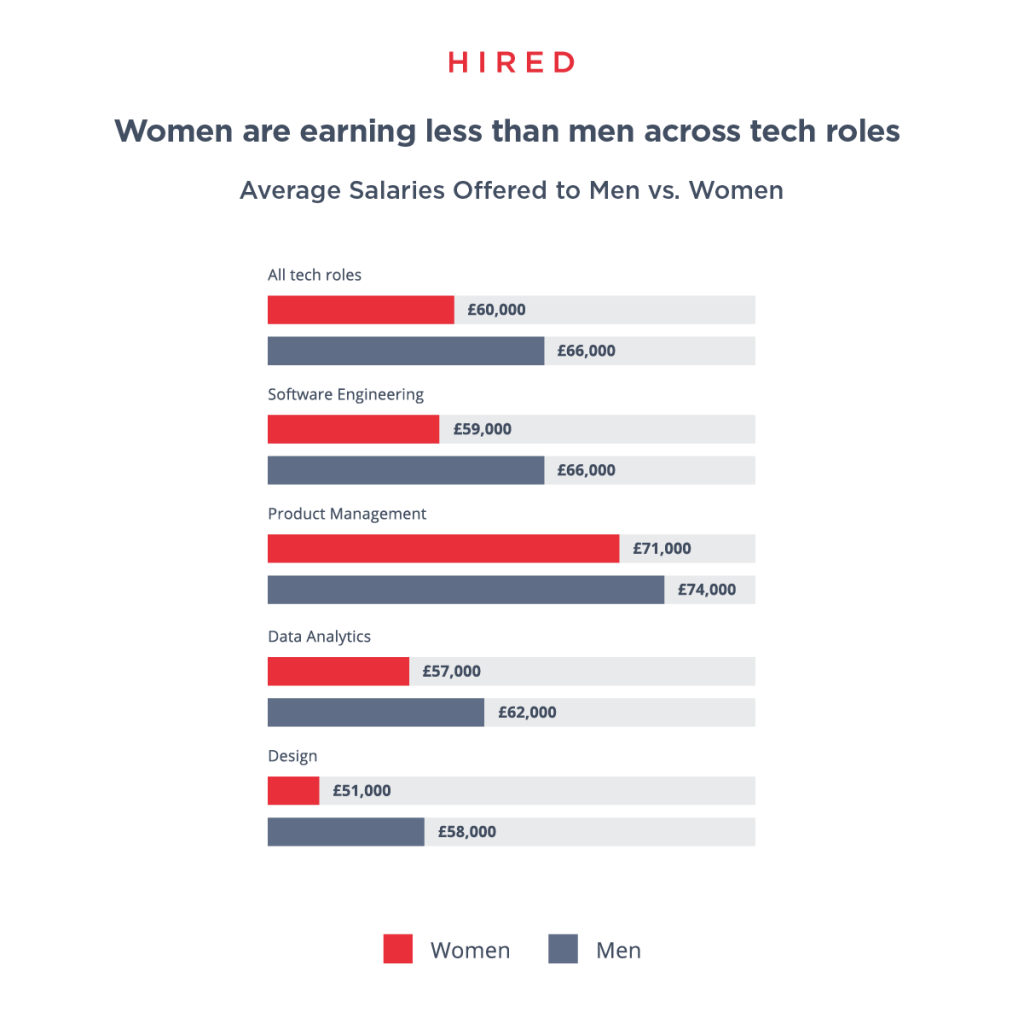 Just 3% of the UK tech workforce are black, with 66% being white, 17% Asian and 6% mixed race. Interestingly, a higher percentage of women in the workforce are people of colour, with a third of the female workforce being Asian versus just 13% of men.

65% of people of colour believe that there is an ethnicity wage gap in the UK tech workplace and 38% have experienced discrimination because of their ethnicity. Much of the diversity conversation up until now has focused on gender, but our report shows that the issue is much more multifaceted than this and action must be taken to tackle race-based discrimination as well. 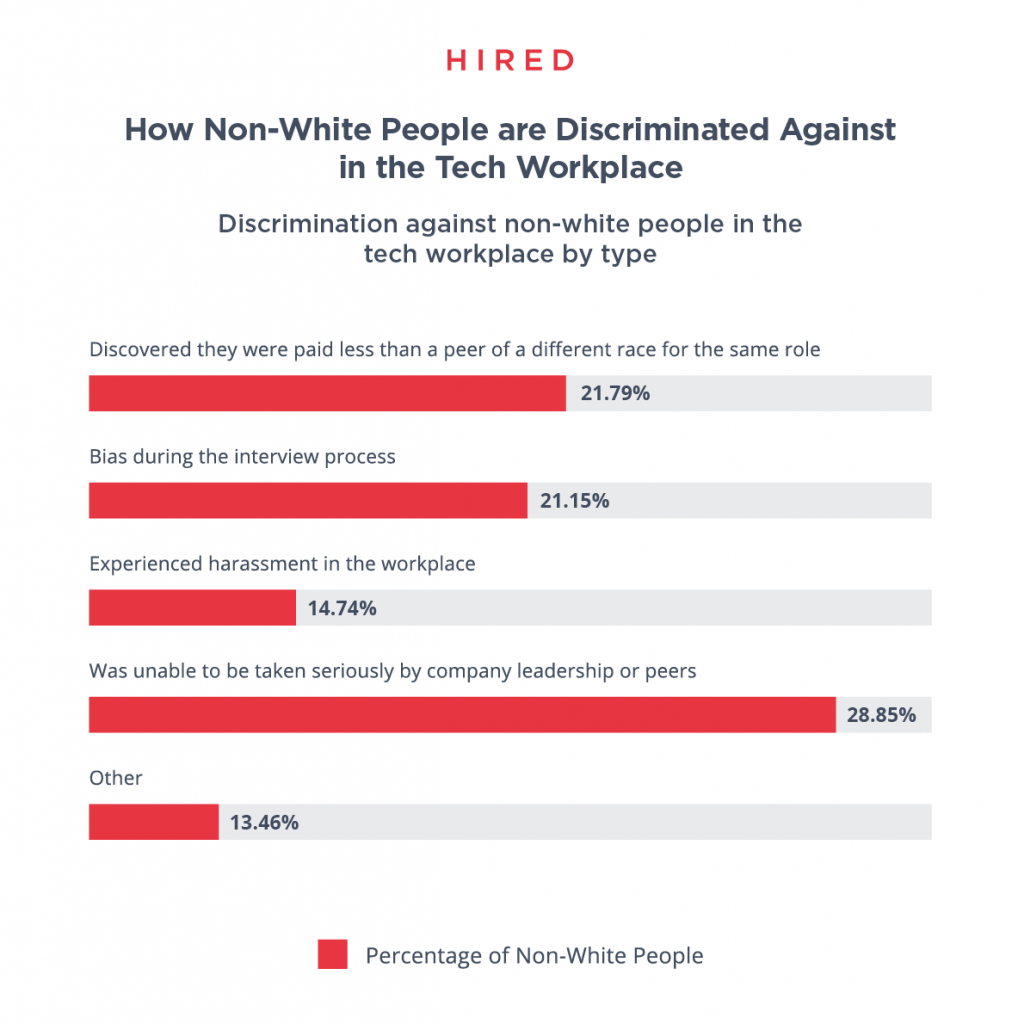 Nearly 1 in 10 people in the tech workforce defines as LGBTQIA+ and the good news is that the majority haven’t experienced discrminiation in the workplace because of their sexuality. However, a third believe there is a wage gap between the LGBTQI+ community and heterosexual people in tech, with a quarter discovering they have been paid £10,000 to £14,999 less than a heterosexual colleague showcasing perhaps that there is hidden bias at play. 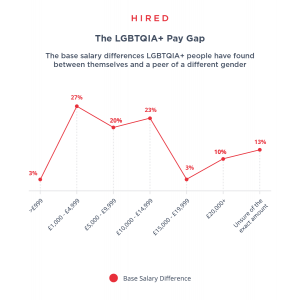 71% of neurodiverse people aren’t taken seriously in the workplace

For the first time in one of our reports we’ve spoken to people in the tech workforce who define as neurodiverse, who we found make up 10% of the entire sector. Neurodiverse people have neurological differences which are recognised and respected as any other human variation. These differences can include those with Dyslexia, Attention Deficit Hyperactivity Disorder (ADHD), Autism and others. Half of neurodiverse people in the workforce believe their needs are adequately supported, which is relatively good news but shows that the industry could do with some improvement in order to best support everyone. 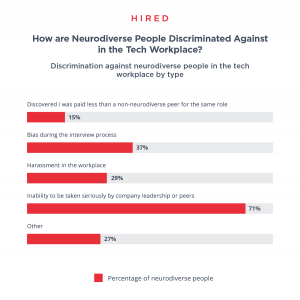 As a company that works closely with UK tech businesses, we know how hard many companies are working to tackle inequity and discrimination in the workplace. Our study sheds a light on the issue by showcasing that the overall landscape is in need of progress as the gender pay gap and discrimination against all minorities remains an issue that urgently needs to be solved. Our hope is that the UK tech industry is able to use our data to spark positive change and that companies continue to stay committed towards creating impactful change.

My path to becoming CEO of Hired has been an interesting one. Prior to this role, I worked at…