In 2020, wage inequality still persists in the workplace and this year, our data revealed a disappointing trend: the wage gap has widened. For the last several years we have analyzed the data in our career marketplace to understand the gender wage gap among tech workers at some of the world’s most innovative companies. Since we have unprecedented visibility into the hiring process on our platform, we’re able to analyze the salaries candidates expect on our marketplace, the salaries companies offer, and how that changes across geographies, age groups, roles, race, and sexual orientation.

At Hired, we know that driving change starts with creating awareness and transparency. By sharing data about the gender wage gap in today’s workforce, we aim to fuel thoughtful conversations between tech talent and companies striving to reach fair pay. That’s why today, for the fourth year in a row, we publish our annual State of Wage Inequality in the Workplace Report.

Looking back to our first report in 2017, and then again in 2018, men were offered higher salaries than women 63% of the time. Last year, we saw our first glimmer of hope that this gap had narrowed to 60% but this year’s data showed a disappointing return to the status quo: 63%. This means that 6 times out of 10, women are offered less money than men to do the exact same job at the exact same company. On average, that salary figure is 3% less.

Beyond the disheartening increase in the wage gap, another critical trend is emerging; there is a clear correlation between the gender wage gap and what we have identified as the “Expectation Gap.” To further explain, salary expectations any candidate has for a given job are closely tied to the salary ultimately offered to them by a prospective employer. Our data reveals male candidates expect to earn more and our report shows their offers match that expectation. Specifically, we found that 65% of the time, a woman’s salary expectation is lower than a man’s when applying to the same job at the same company. 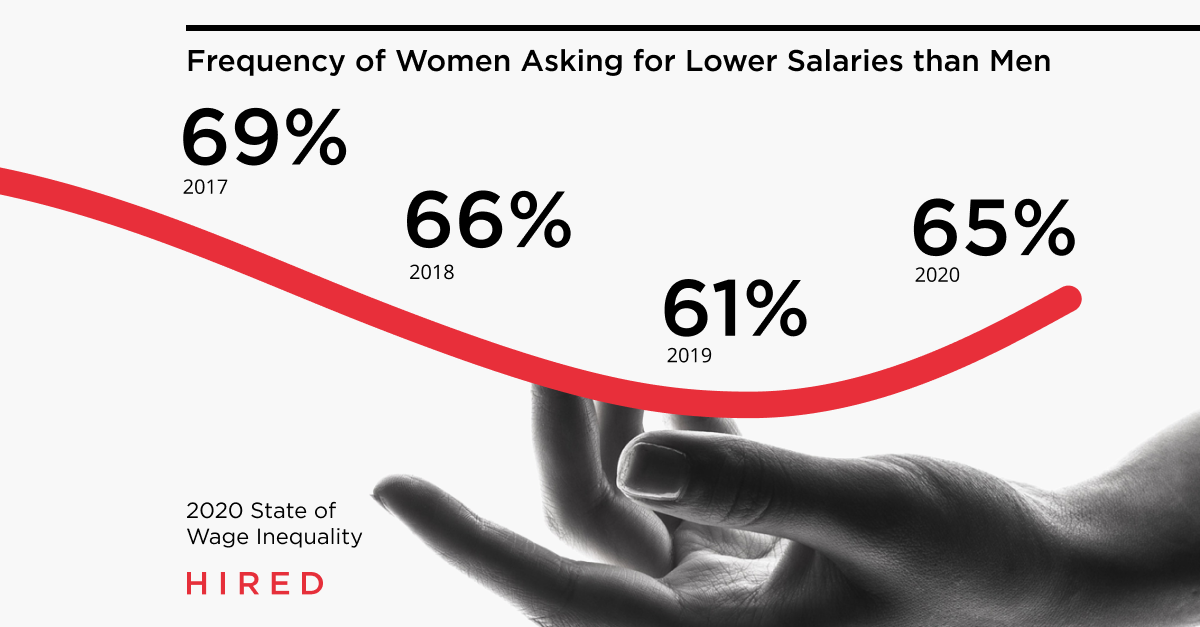 We are in a unique position to analyze the Expectation Gap because when a candidate joins our platform, they’re required to include an expected salary based on their skills and the role they’re seeking. We also require employers to share salary details upfront when they contact a candidate for a specific role, so we’re able to compare the salaries that are expected by the candidate with the salaries that are ultimately agreed upon after negotiations, which gives us a crystal clear look at this murky process.

Regardless of skill level, age or years of experience, women are consistently trapped by this Expectation Gap. While experienced personally, the Expectation Gap is borne from a variety of external factors, including lack of easily available compensation data and a phenomenon known as imposter syndrome. Combined with other influences, these factors further cement the wage gap, and this is also true of many candidates of color and those identifying as LGBTQ+. 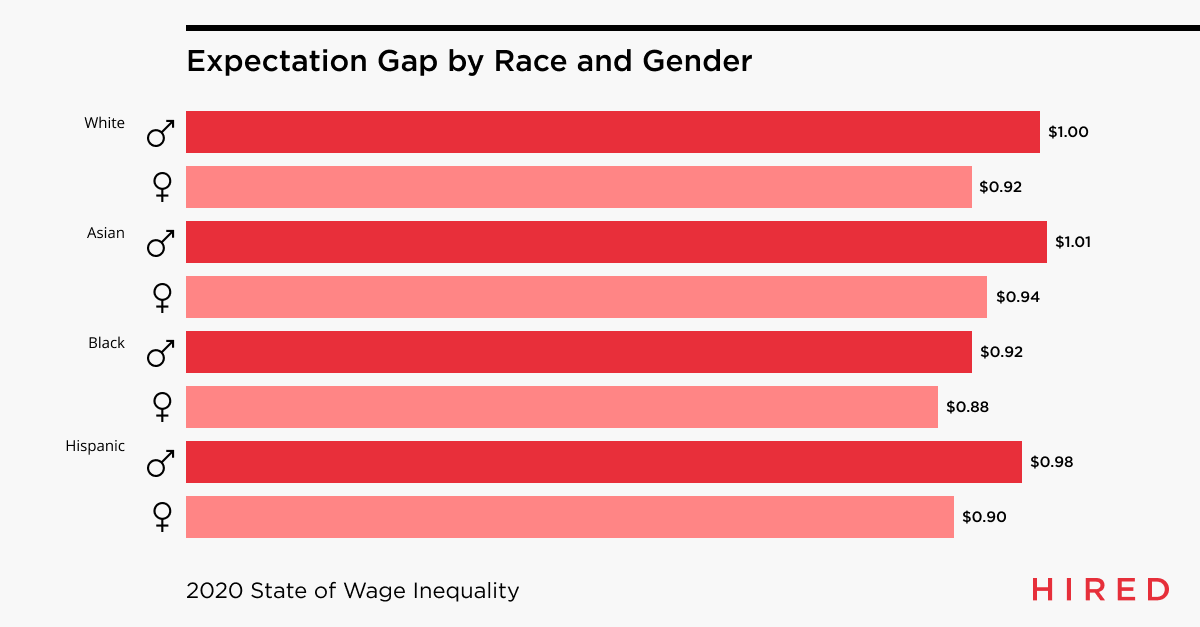 Women’s expectations fell across every racial group this year, which, notably, was not the case for men. The most dramatic and disheartening example is black women, who expect to earn just $0.88 for every $1.00 that a white man expects. While black men’s expectations fell from $0.93 last year to $0.92 this year, Asian men and Hispanic men actually increased their expectations. Asian men now expect to earn $1.01 for every $1.00 a white man expects, up from $0.99 the year prior. Hispanic men now expect $0.98, which while not totally closing the gap is a considerable improvement from the $0.94 they expected last year.

Finally, our data shows that LGBTQ+ women have the highest gap in both expectations and ultimate wages, earning $.90 to every $1 non-LGBTQ+ men earn. Whether through greater pay transparency by employers, improved education around compensation in public, or simply a more open, less stigmatized dialogue about money between peers, closing the Expectation Gap is a critical component of closing the wage gap.

In addition to our proprietary data, we surveyed more than 2,400 job candidates to better understand how tech workers perceive wage inequality. We found that 84% of women believe that a wage gap definitely exists, while more than a third of the men we interviewed said they either don’t believe or are not sure there’s a gender gap in wages. Despite there being data to prove that a wage gap exists, tech talent are not always aware of how it impacts them – 60% have discovered they were being paid less than a male peer, and just 24% of men have discovered the same. The source of this revelation is usually through discussions with colleagues – 77% of women and 69% of men discovered their wage gap through a coworker. 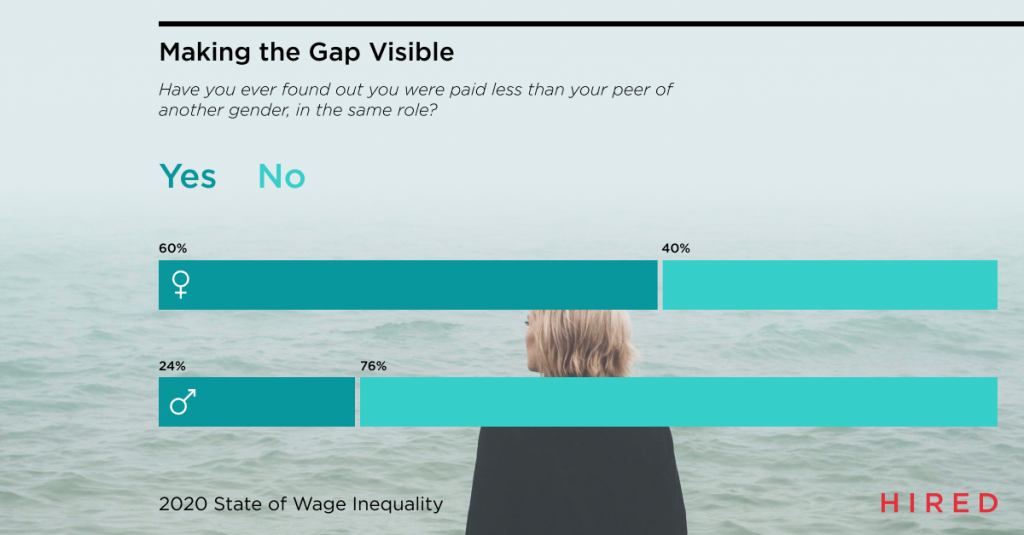 Beyond the Expectation Gap and subsequent wage gaps that many women experience, we also discovered some alarming trends regarding discrimination in the workplace. In the last 5 years, more than 63% of women we interviewed said they felt discriminated against at work because of their gender, while just 7% of men said the same. 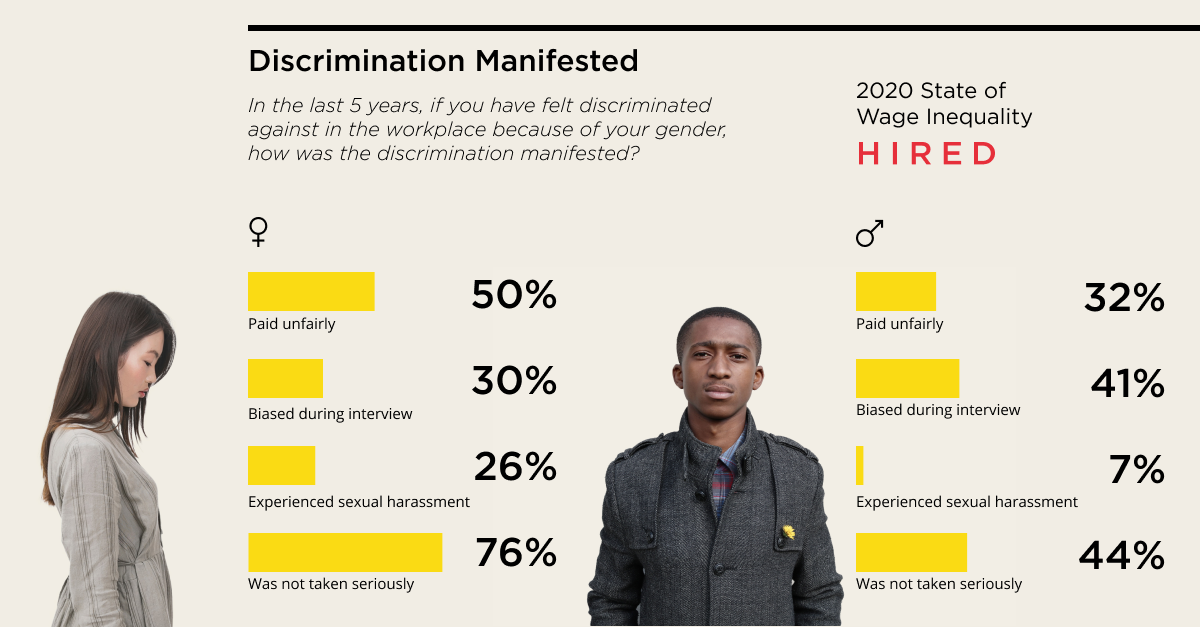 When we dig deeper into what forms of discrimination women are facing, we see it typically  boils down to one of two things – the inability to be taken seriously by company leadership and unfair pay, with 75% of women reporting the former and 50% reporting the latter. And despite the rise of the #MeToo movement, 26% of women we spoke with cited sexual harassment as a common form of discrimination.

When it comes to closing the Expectation Gap, there’s mounting evidence that increased transparency around wages and the value of a given skillset as a professional may help close it. The idea is that if you have a clear understanding of what companies are paying your peers, you’ll be more confident assessing your own market value, and in turn, be more effective in fighting for fair pay. And finally, to close the wage gap employers must commit to offering equal pay for equal work, regardless of the person’s gender, race or LGBQT+ status.

While this year’s report has some discouraging findings, I remain optimistic that through collective action from employers we can make significant strides towards eliminating workplace discrimination and close both the Expectation Gap and the wage gap once and for all. At Hired, we firmly believe that equality is a fundamental human right. We remain committed to sharing transparent salary data to shed light on this pervasive issue, with the hope that it ultimately leads to the collective action we need to finally achieve true pay parity.

On June 23, 2016, 33.6 million people went into polling stations across the UK to decide whether Britain should…