For years, tech innovations have brought unprecedented comfort and convenience, and in tandem, have challenged the old ways of doing business, the way we communicate, and even the way we make a living. There’s no doubt our future will be built through lines of code  — but who are these coders?

At Hired, we’re on a mission to match tech talent (and said coders) with jobs they love. This includes giving them the tools and insights they need to be in control of their career. We believe in empowering tech talent with data that helps them understand their market worth and reveals hiring trends that ensure they have a more seamless job search experience. Our marketplace of over 10,000 companies and millions of job seekers uniquely positions us to share our data with the tech talent community because we have unprecedented visibility into the hiring process between candidates and companies.

To understand the people sitting at the helm of innovation and in order to give software engineers the data they need to make informed career decisions, we are releasing an in-depth data report, The State of Software Engineers for the very first time. The report reveals the tech roles and programming languages driving up company demand and the working preferences of the developer community. We are publishing this report to continue fueling thoughtful career conversations among the developer community and to provide actionable data that will help software engineers reach their goals.

The Hottest Jobs in Software Engineering

Developers are sitting at the forefront of progress and the backbone of innovation, so it’s no wonder c-suite executives say developer talent is more valuable than money. Therefore, it’s critical to understand the demand for software engineer roles from both a company and talent perspective. From a talent perspective, software engineers should be armed with data that helps them understand the skill sets needed to succeed. From a company’s talent planning lens, knowing the market worth for their engineering roles could be the make or break from winning over a top candidate with a competitive salary offer.

In order to gain a deeper understanding of the global demand for software engineers, we looked at interview requests and job offers facilitated on the Hired marketplace to reveal industry trends that are making a big impact. Data revealed that tech talent with expertise in blockchain and security are hot: demand for blockchain engineers is up a whopping 517 percent year over year and demand for security engineers is up by 132 percent.

As demand increases for them in a competitive hiring market, so do salaries. In New York, San Francisco and Toronto, blockchain engineers are among the top three highest paid. When you zoom into salary data for software engineers in key tech hubs, it also speaks to how much talent needs fluctuate from city to city. For example, gaming engineers are the highest paid group in New York, while demand for natural language processing engineer salaries are soaring in Toronto.

Coding Languages that are Taking Off

Our data shows that candidates with experience in Go are the most attractive by far. This is likely because the language is new, and supply is limited, which allows talent who has these skills to stand out. When we surveyed developers on our platform to see which languages they actually use, Go was nowhere near the top — only 7% said they primarily work with it. 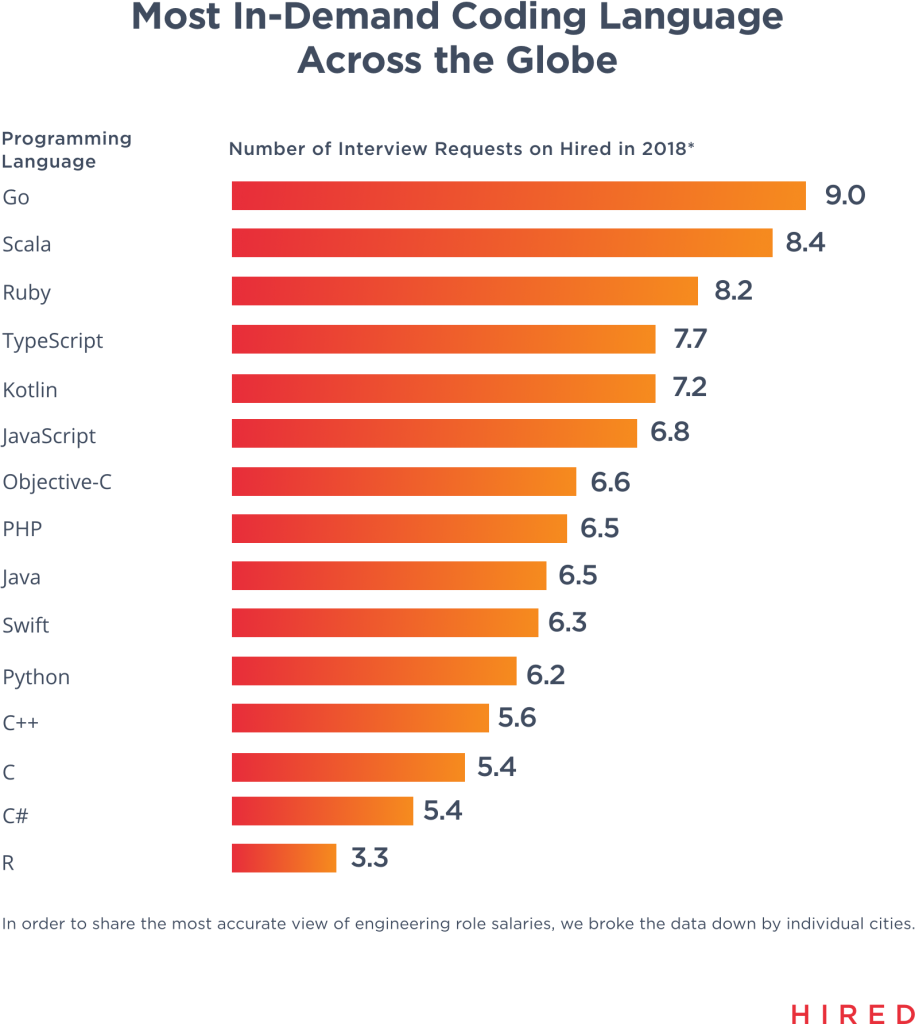 When we look at the most in-demand programming languages in San Francisco Bay Area, Toronto, and London, Typescript is the clear winner  — but not by much. Go, Scala, and Ruby are all close behind. And 2,903 miles east in New York, employers tend to favor Ruby above all. We can also conclude that no one likes R; it is consistently the least in-demand language across markets.

Where Developers Learn to Code

In addition to looking at Hired’s marketplace data, we surveyed developers and found that the standard four year degree isn’t so typical for engineers. While 46% earned a computer science degree, one in five survey respondents told us they are self-taught.  Another 13% are taking a hybrid approach by participating in developer bootcamps through companies like General Assembly and Hack Reactor.

According to our survey data, this is an effective approach for getting job-ready: 76% of bootcamp graduates say it helped prepare them for a software engineering job. This is great news for individuals looking to break into the tech industry, or who are looking for a lucrative career in an industry that has promise.

Around the globe, there are countless communities who rally around the importance of open source, however, our data reveals that this group of loyal users is smaller than you’d expect. Only 9 percent of our survey respondents said they frequently contribute to open source, while 53% have never contributed to open source before.

We also found that software engineers are interested in pair programming, a development approach in which two programmers work together at one workstation. In fact, 48% said it would increase their interest in working at a company if they offered pair programming. Teamwork makes the dream work, right?

At Hired, we believe that tech talent should be in control of their job search, and we understand how complicated and painful finding a job can be. From the beginning, we’ve set out to arm our candidates with the data and insights they need to make the best career decision. We all know that developers are leading innovation across the globe, and this report further demonstrates how developers are a diverse group. Skill sets and programming language demands may vary by region, but with this data, we hope developers feel more prepared to propel their careers forward.

Browse our other data reports:

Today we are excited to announce that Hired has been acquired by Vettery, a leading talent marketplace that also…