Tech jobs in San Francisco are generally known to come hand in hand with handsome compensation. Although other cities are increasingly rising to compete, the Bay Area has managed to maintain the most competitive tech salaries. Using real salary data, Hired has a unique perspective into how technical talent gets paid across a variety of geographies—including granularity about differences between types of roles.

It’s hardly surprising that Bay Area companies offer the highest average salaries in tech given 45% of venture capital invested in the entire United States is going to San Francisco and Silicon Valley-based companies. The billions pouring into the area are understandable given two-thirds of the U.S.’s largest unicorns call the Bay Area home.

For tech employees, this can often translate to higher salaries. In 2018, the average tech workers’ salary in the San Francisco Bay Area was $142k, a full $10k more than in Seattle, the next-best city for tech salaries. Average tech salaries in the Bay Area have shown consistent growth each year since 2015, with an increase of $7k between 2017 and 2018 alone. For software engineers hoping to maximize their earning potential, there may be a case to be made for choosing certain specialties and skill sets over others.

In search of the best salary

In the Bay Area, search engineers come out on top in terms of cash compensation, earning an average of $157k — $15k more than the average tech worker in the area. The recent flurry of interest around blockchain and the rising incidence of security breaches has helped security and blockchain engineers come in at #2 and #3 with averages of $156k and $155k, respectively.

At the other end of the spectrum, engineering generalists receive lower salaries across the board. Frontend developers make the lowest average salary in the region at $140k. Further, mobile, backend, and full-stack engineers all come in the bottom 5 in terms of salary. 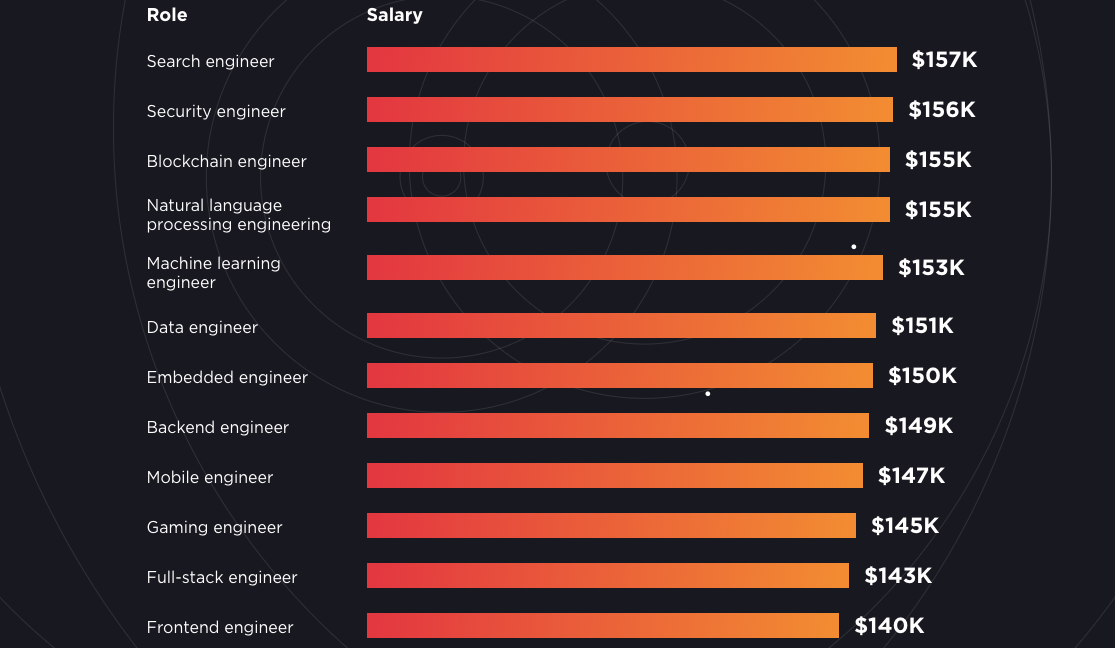 The cost of living puzzle

While Bay Area employees generally rake in the highest tech salaries globally, cost of living is a crucial factor which can’t be ignored—particularly with the average San Francisco resident paying $3,500 in rent each month.

When compared to New York, which has long been hailed as one of the most expensive cities in the world, rent in San Francisco costs approximately 8% more. But data suggests that higher salaries can outweigh this difference, with local purchasing power coming in 38% higher in San Francisco than in New York.

That said, how far your money goes will depend on a number of other factors, such as stage of life, whether you buy or rent, your commuting habits, and more. There’s often little that can be done to counteract the high cost of living in certain cities, so the most important thing is to be aware of how your expenses will impact how much you will have left over at the end of each month.

In sum, regardless of your career track, software engineers in the San Francisco Bay Area can generally expect to be well-paid—but just how far that salary goes depends on how you choose to spend your money in what has become one of the most expensive cities in the world.

Read more about how tech roles and programming languages stack up across the globe in Hired’s 2019 State of Software Engineers report.

Engineering Individual Contributor vs Manager? Ask Yourself These 4 Questions

The age-old engineering career development question rings as true at NatureBox as everywhere else: should I pursue a role…

What to Do When You’re Going to Miss a Deadline

We’ve (mostly) all been there: Scrambling to meet an unrealistic deadline. For software engineers, who often fall subject to…

Interviewing for an Engineering Manager Role? 15 Questions You Should be Prepared to Answer

Congratulations! You’ve got yourself an interview to become an engineering manager. That’s great news. There’s just one problem –…