In a job market where employers are in tough competition for talent, it’s no surprise that tech companies have risen to the challenge by offering generous salaries. And there’s no doubt that technical skills are a huge asset to employees, with a new study finding the global average salary for tech workers in software engineering, design, product management, and data analytics to be $135K in 2017.

By comparison, the median personal income for workers with a Bachelor’s degree in the U.S. in 2017 was just $56,592. Even those with a professional degree earned less than the average tech worker, taking home $91,538 last year. Here, we’ll dive into how tech salaries break down for various roles, including an analysis of how that’s changed in recent years.

Most technical not necessarily the highest paid

Even within the tech industry, there are significant salary differences to note.

Perhaps surprisingly, this study found that both software engineers and those in data analytics roles—often thought of as the highest-paid of tech workers—came in second to product managers in terms of average salary in 2017. Product manager salaries topped the charts at $145K, $10K above the global tech salary average and up a whopping 14% since 2015. 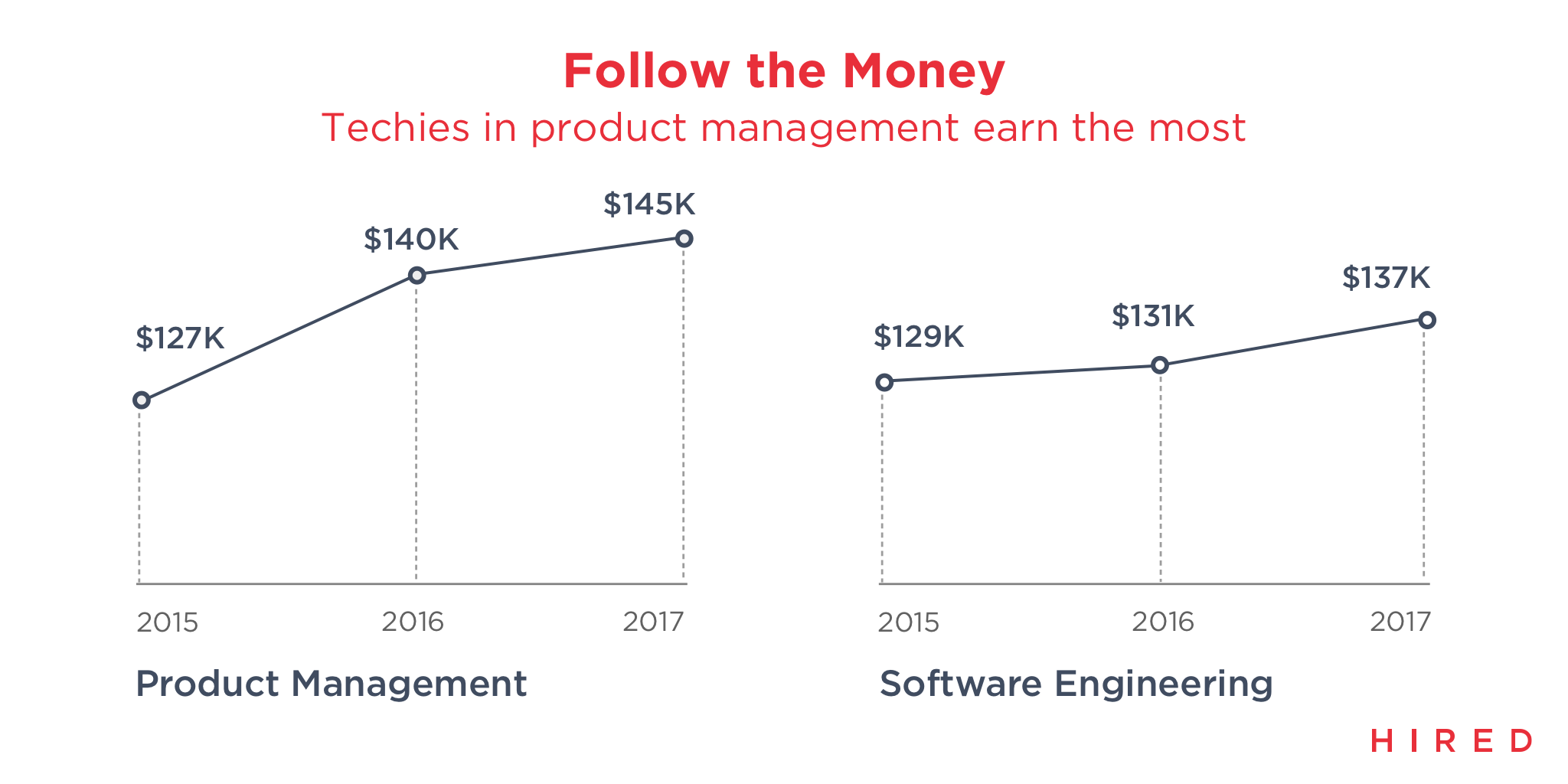 Roles in software engineering and data analytics were found to pay an average of $137K in 2017, just above the global average and nearly 6% less than the average product manager salary. Both types of roles also saw less growth over the past two years compared to product manager roles.

In fact, design salaries grew at a faster rate in 2017 than any other technical roles analyzed in this study. If this upward trend continues, designers may soon earn just as much as their more technical counterparts—a promising prospect for designers across the world.

Despite not being the top earners in this analysis, software engineers are by far the most in-demand candidates amongst tech companies. In fact, when ranked by the most requested positions, software roles make up all five of the top slots, suggesting that—even if average salaries are higher for product managers—engineering candidates have a significant amount of leverage when negotiating their salaries. 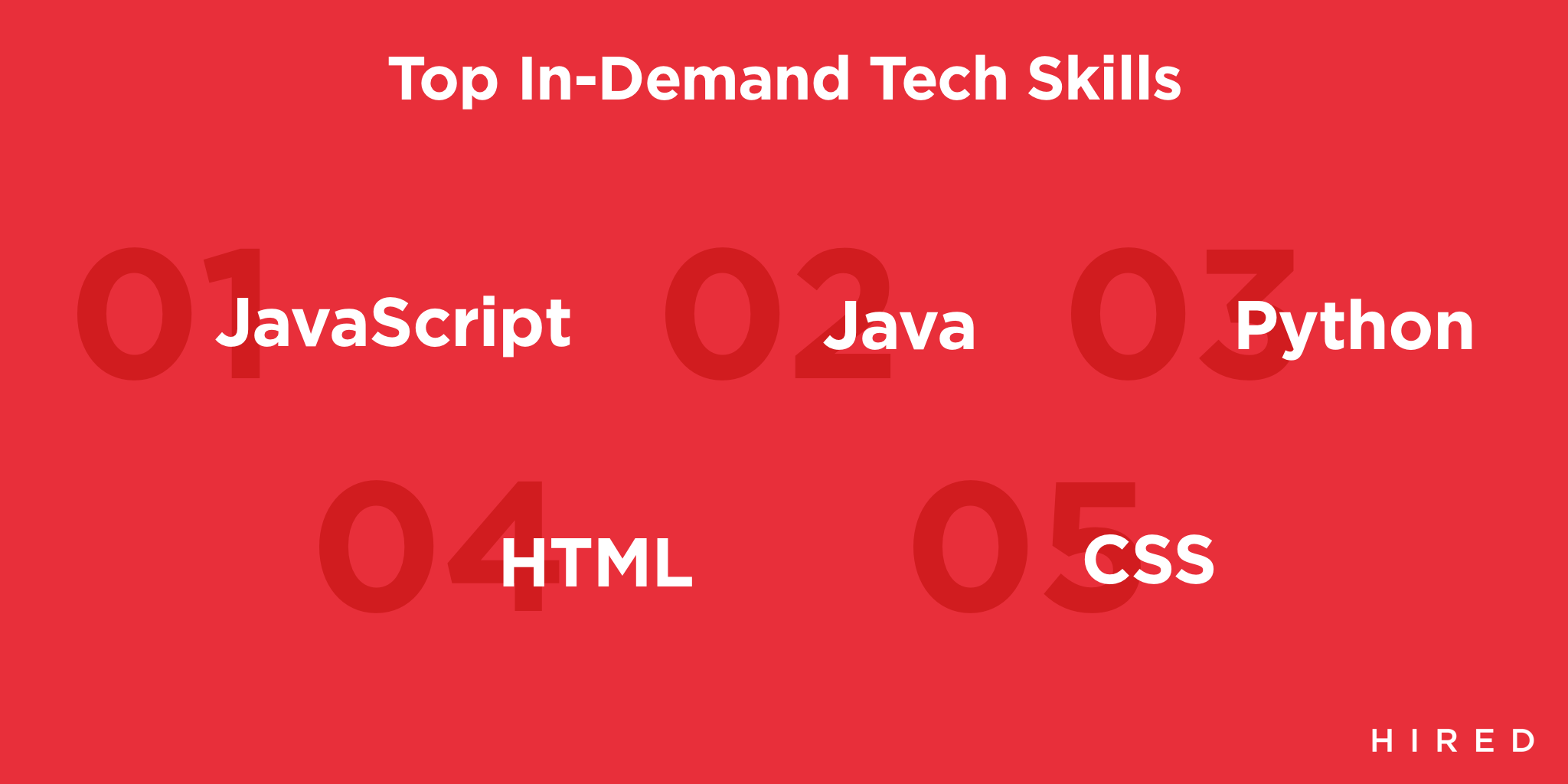 As you might expect based on the above data, the top five in-demand tech skills are all programming languages, including JavaScript, Java, Python, HTML, and CSS. Despite hundreds of programming languages out there, the data suggests that it’s these old(er) standards that tech companies still hold most highly when evaluating potential employees.

If you’re a tech worker in a (comparatively) lower-paying role, that doesn’t necessarily mean you should be targeting a product management role for your next job. It’s important to keep in mind that salary is only one factor in job satisfaction, so don’t be swayed toward a higher (average) salary if you’re already happy with your role—and remember that average numbers don’t tell the whole story, so there’s a good change you could earn more than that.

On the other hand, if you’re new to the job market or looking to change roles, potential salaries coupled with in-demand skills can certainly help to evaluate which career path might be the best for you based on your goals. Again, it’s just one factor to juggle against many others, but it’s worth looking into before making your decision.

If you’re searching for a new job and worried about gaps in your resume, you’re not alone—periods of unemployment…

Job Hunting? How to Network with Intention

A colleague of mine recently found himself in the job search after a long time with the same company,…