Dear Developers: Coding Languages That Will Set You Apart

Dear Developers: Coding Languages That Will Set You Apart

As any software engineer will tell you, there are a plethora of coding languages out there and varying attitudes toward each at both the company and individual level. To dive a level deeper, Hired’s 2019 State of Software Engineers report examines not only the coding languages that set candidates apart from their peers, but also the preferences of developers from across the globe—and reveals some interesting and sometimes contradictory data about the languages that underlie so much of the technology that exists today.

As it turns out, the programming languages that make candidates stand out to a company aren’t necessarily the ones they end up using after being hired.

We dove in to our data to determine which programming language leads to more interview requests, and found that Go is the most in-demand, followed by Scala and Ruby (that is, candidates who list Go as a skill are more likely to get interview requests from employers on the platform). But it’s not utilization that makes these languages popular amongst employers, as only 7% of developers report using Go, 3% Scala, and 10% Ruby—compared with a full 62% of developers who use JavaScript.

So while these languages might not be in demand for the reason you might think—that companies are using more of them than other programming languages—the data suggests a relationship between candidates’ success and their command of certain languages. Perhaps it’s that the more common languages are basically table stakes for developers—that is, virtually every software engineer knows how to use JavaScript—while more complex languages like Go aren’t added typically to your repertoire until after you’ve mastered the basics. 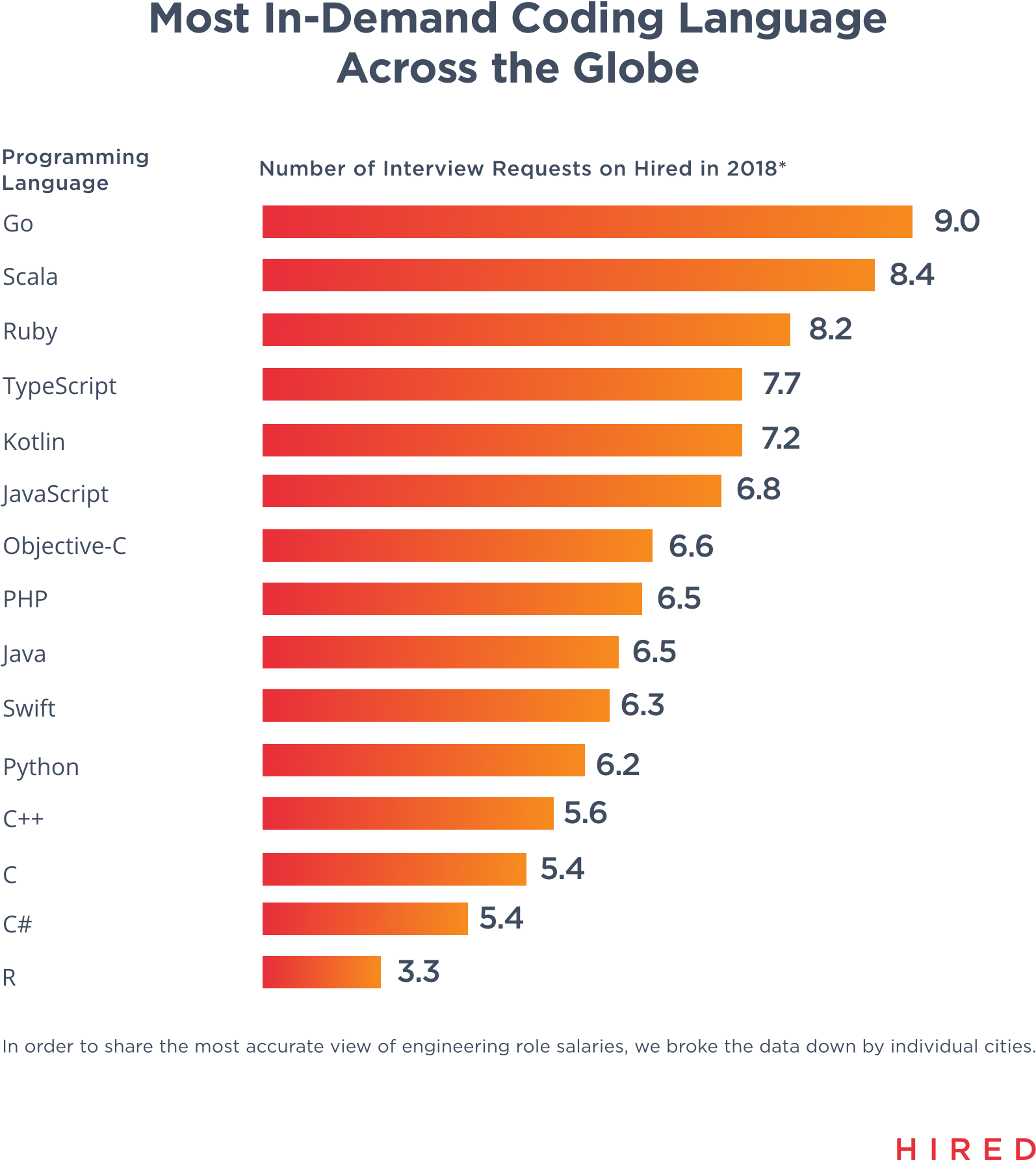 But don’t despair if you’re not a Scala master. While gaining experience in a variety of languages can demonstrate your ability to learn and passion for the craft, most jobs will realistically require a lot of work in the likes of JavaScript, Java, and Python.

As with spoken languages, geography matters

While Go tops the list across geographies, the hottest coding language differs depending on which job market you look at. Engineers who know TypeScript, for example, are the most desirable candidates in San Francisco, London, and Toronto, whereas Ruby takes the number one spot in New York and Parisian companies appear to love Go programmers. 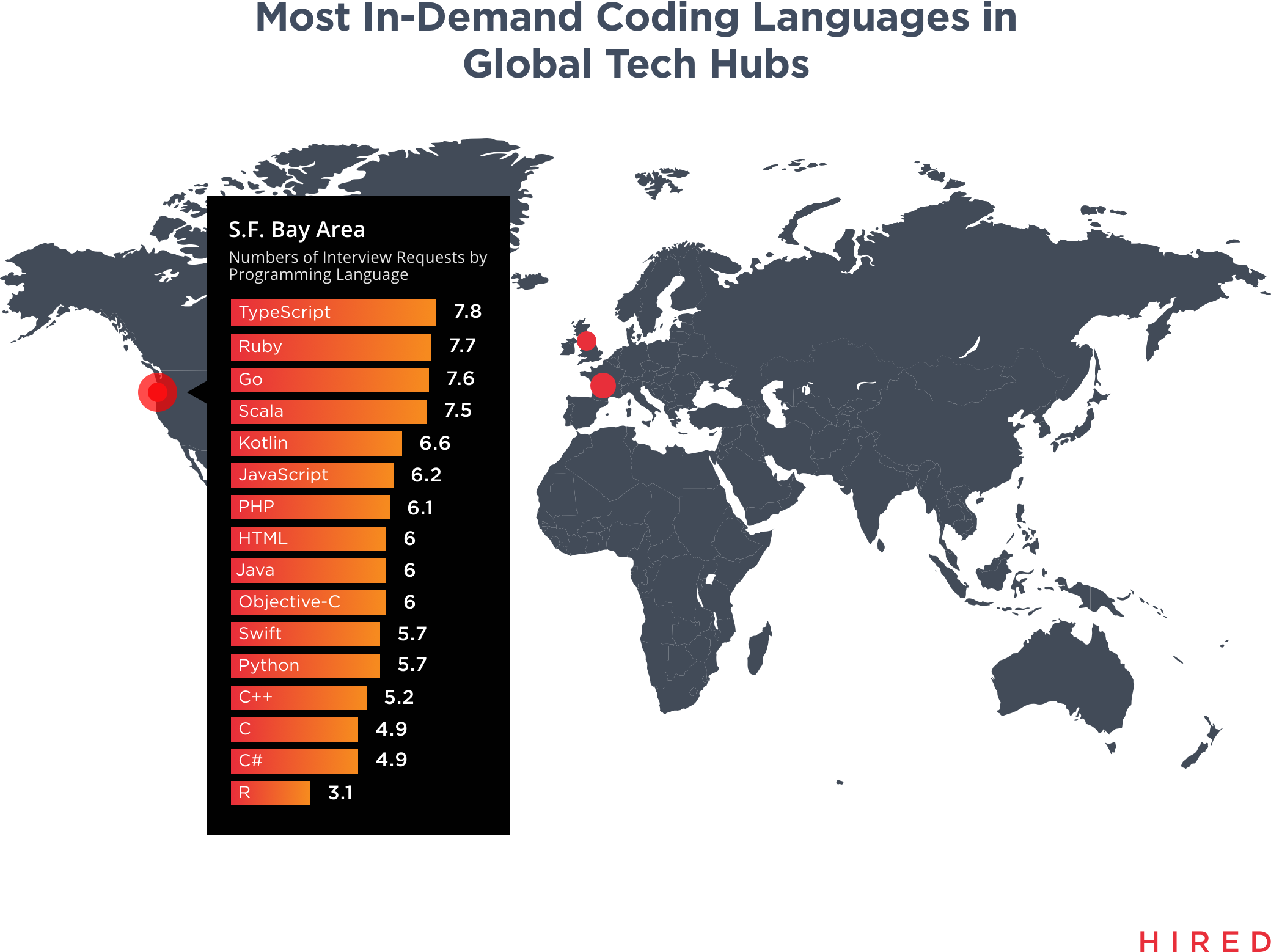 That’s not to say that New York engineers should drop everything to start learning Ruby, but it’s good to at least have a sense for which skills might help to make you more competitive in your target job market. And some of these languages may be easier to pick up than others: TypeScript, for example, is a superset of JavaScript, so learning it won’t feel like learning an entirely new language. 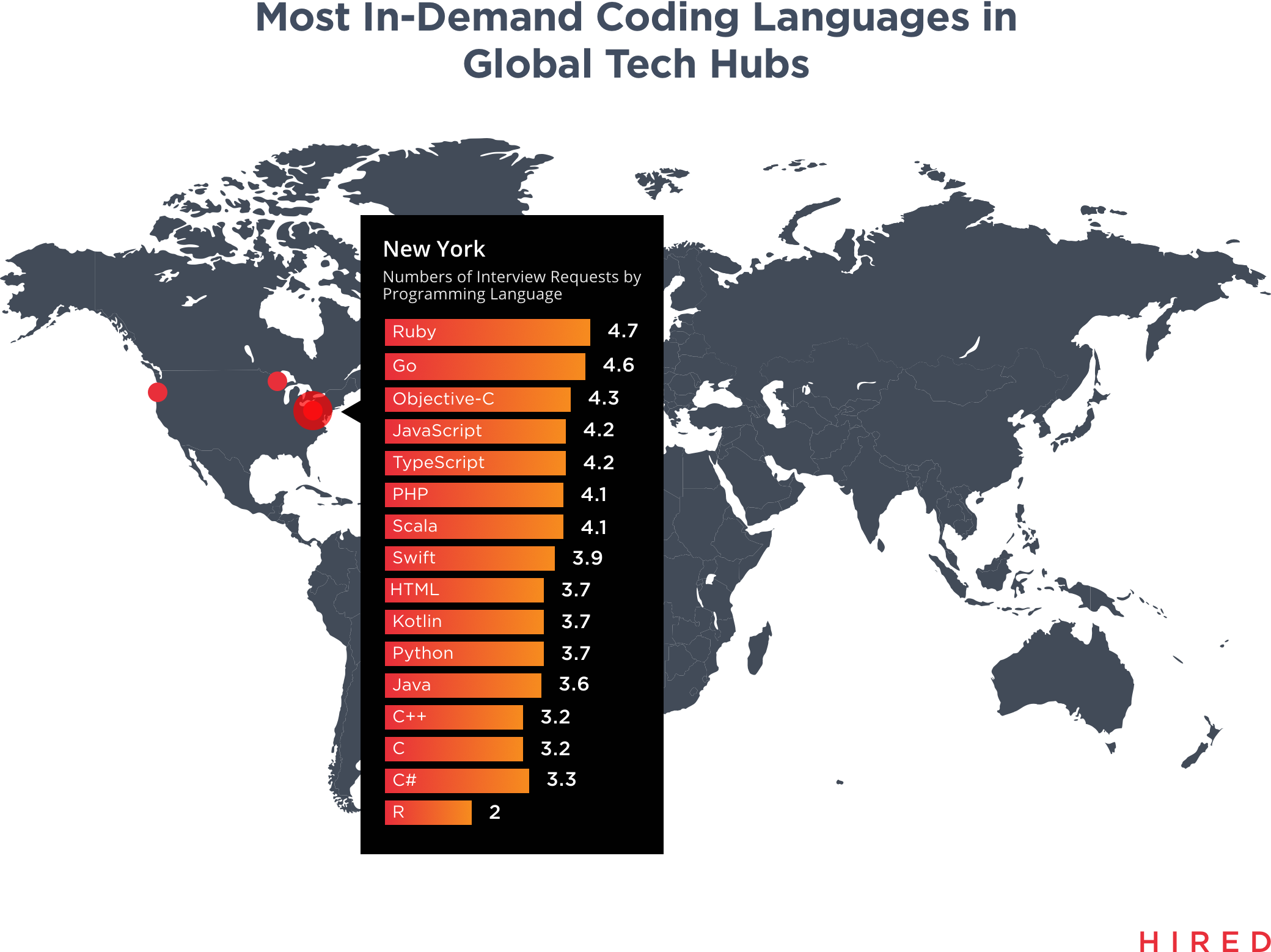 How the engineers feel

Employer demands aside, developers themselves have their own opinions of the different coding languages, often due to how “fun” they are to use and how many resources there are for learning and development related to a particular language.

Python and JavaScript come in as the top two most loved languages—which is a good thing given how many developers report using these languages in their day-to-day. PHP is the most disliked language, followed by Java. Java, however, is a controversial case, as it’s both the third most loved as well as second most hated language.

While knowing which languages will set you apart from the rest can help you to make your profile more attractive to prospective employers, it’s just one piece of the engineering talent puzzle. In addition to more granularity about coding languages and their competitiveness, Hired’s 2019 State of Software Engineers Report dives into working styles, the interview process, and salaries—all of which can give you a better overview of the market, where it’s going, and how to best tailor your experiences and skills as you develop your software engineering career.

With the five most in-demand tech jobs in 2018 all being different flavors of developers, it’s no surprise that…

Want To Stand Out Amongst Software Engineers? Try Competitive Programming

In a world full of established talent and up-and-coming self-trained coders, it can be difficult to stand out as…

How to Approach Writing a Take Home Coding Challenge

While behavioral interviews will always have a place in evaluating soft skills, take-home coding challenges have become very popular…